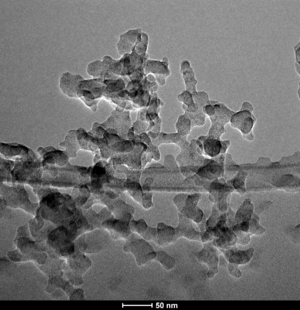 Several of our current projects are described below

Soot has been identified as the second largest source of climate change after CO2 and it contributes to ambient fine particulates that cause millions of deaths worldwide each year. Diesel engines are a major contributor to total soot emissions because diesel fuels have high sooting tendencies. Poly(oxymethylene) ethers (POMEs) are biomass-derived sustainable diesel fuels reported to have low soot emissions from engines. The structures of the POMEs in these earlier studies are alternating oxygen and carbon atoms terminated with methyl groups on both ends.  Unfortunately, methyl-POMEs suffer from high water solubility and low energy density. Replacing the methyl groups with larger alkyl groups can overcome these disadvantages.  However, larger alkyl groups will lead to higher sooting tendencies. To optimize this trade-off, the sooting tendencies of methyl-POMEs and alkyl-POMEs need to be quantified. Furthermore, engines fueled with these compounds need to be simulated with computational fluid dynamics (CFD), and these simulations require validated chemical kinetic mechanisms. Finally, if the reaction pathways of these compounds are understood, then new POME-type compounds with better properties can be identified.  Therefore, in this work, a series of methyl-POMEs and alkyl-POMEs were synthesized, their sooting tendencies were quantified, and concentrations of species and soot were measured in flames doped with a subset of them. 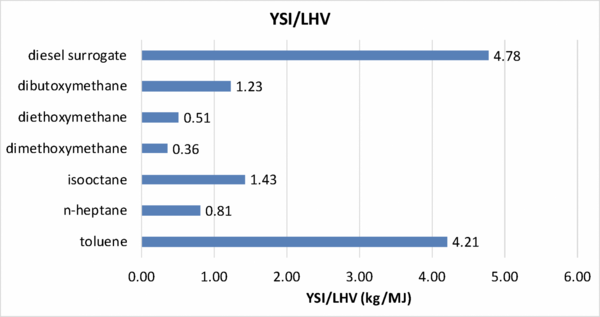 The sooting tendencies were characterized by the Yield Sooting Index (YSI).  This parameter is based on the maximum soot concentration measured in coflow diffusion flames whose fuel is CH4 doped with 1000 ppm of each test compound. The YSIs of the methyl-POMEs and alkyl-POMEs are at least one order of magnitude lower than a certification diesel fuel. The ratio of YSI to lower heating value (LHV) was calculated to evaluate the energy penalty of the oxygen atoms. The calculated YSI/LHV of the POMEs are lower than conventional diesel fuels and their components.  These results demonstrate that all POMEs have soot emission benefits, and ongoing work is examining the trade-off between different POMEs.

For the flame measurements, larger concentrations of selected POMEs were added to the fuel.  The concentrations of species that lead to soot formation, such as acetylene and benzene, were measured via gas probe sampling and online electron-impact mass spectrometry (EI-MS).  Soot volume fraction was quantified by color ratio pyrometry (CRP), a greybody-radiation-based method. These data will be used to test the accuracy of kinetic mechanisms and to illuminate the reaction pathways that cause the extremely low sooting tendencies of the POMEs.

This work is a collaboration with Bret Windom, Jason Quinn, and Kenneth Reardon (Colorado State University), Nicole Labbe (Colorado-Boulder), and Thomas Foust (the National Renewable Energy Laboratory; NREL).  It is supported by an award from the US Department of Energy’s Co-optimization of Fuels and Engines program (DE-EE0008726; Alicia Lindauer, Program Manager).

X-Ray-Based Measurements of Temperature in Flames 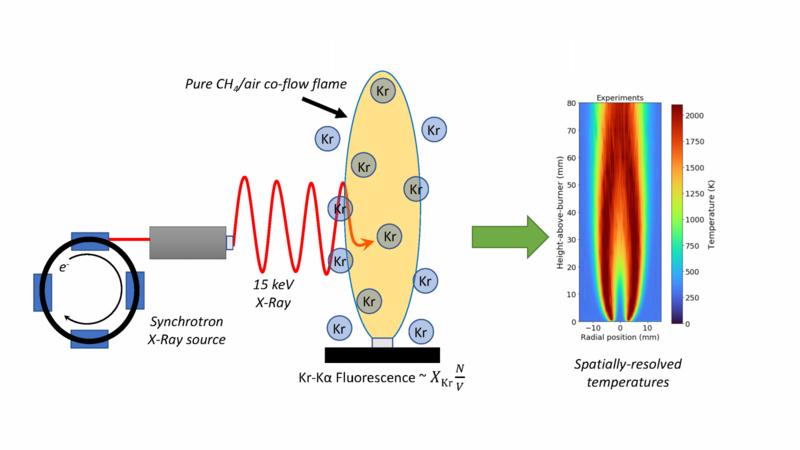 Temperature is a critical variable in combustion devices, since it controls the rates of the chemical reactions that determine efficiency and emissions.  Conventional temperature diagnostics used in combustion research include thermocouples and laser-based methods in the UV or visible portions of the spectrum.  Thermocouples require radiation corrections and can perturb the flame, while laser-based methods suffer interferences from soot particles and can depend on many uncertain parameters (bulk gas composition for Rayleigh scattering, collisional quenching rates for fluorescence, etc.). 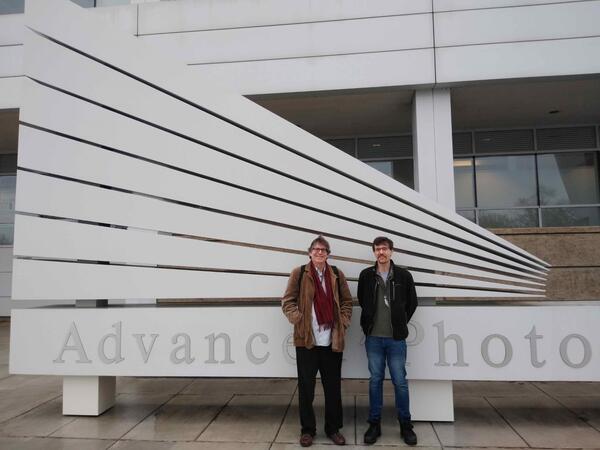 This study used a novel x-ray-based technique to measure in-situ temperatures in methane/air co-flow flames and compared the results to numerical simulations.  The methane and air streams were seeded with a small concentration of krypton (2.4% by mole), and the krypton number density was measured using x-ray fluorescence (XRF).  The Kr atoms were converted to core-hole ions by ionization of 1s electrons with 15.1 keV photons, then the K-alpha fluorescence at 12.6 keV was detected as 2p electrons relaxed into the 1s holes.  To obtain adequate signals, the measurements were performed using a synchrotron source:  beamline 7-BM at the Advanced Photon Source.  The measured number densities were converted to temperature using the ideal gas law and assuming that the Kr mole fraction and pressure were constant.  The errors from these assumptions were quantified with the simulations and found to be negligible (pressure) and 3.0% or less (Kr mole fraction).  The simulations included a detailed chemical kinetic mechanism and species-dependent transport properties; the adequacy of the transport model was validated by comparing measurements and simulations for a nonreacting flow where krypton was only present in the inner jet stream. 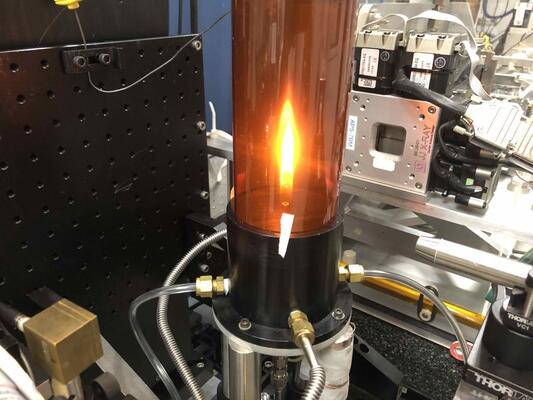 The XRF data analysis does not depend on the collisional environment since the lifetime of the core-hole ion is only 0.18 fs.  The XRF signal was integrated for 1 s at each flame location, which produced random uncertainties of 4.9% or less in each individual measurement.  The flame contained significant amounts of soot (maximum soot volume fraction = 0.3 ppm), but the XRF measurements were unaffected by it due to the weak interaction of hard x-rays with carbon and phase boundaries.  Interferences were similarly negligible in the vicinity of the burner surface since x-rays do not reflect at more than grazing angles.  Thus, temperatures could be obtained with high accuracy throughout the flame.  Excellent agreement was found between the measured and simulated temperatures. 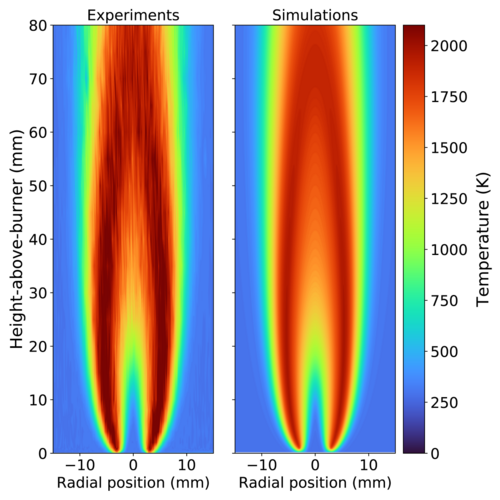 This work is a collaboration with Robert Tranter and Alan Kastengren (Argonne National Laboratory), and Yuan Xuan (Penn State University).  It is supported by an award from the US Department of Energy’s Co-optimization of Fuels and Engines program (DE-EE0007983; Kevin Stork, Program Manager).  It used resources of the Advanced Photon Source, a U.S. Department of Energy (DOE) Office of Science User Facility operated for the DOE Office of Science by Argonne National Laboratory under Contract No. DE-AC02-06CH11357.